TOT for the Healthcare Workers Working with Institutionalised Women

TOT for the Healthcare Workers Working with Institutionalised Women

The Training of Trainers (TOT) workshop organised in collaboration with the STD Clinic- Kandy was concluded successfully on 10th and 11th August at Sathvodaya, Kandy. The workshop intended to increase the technical capacity of the healthcare workers working with institutionalized women on HIV prevention and reproductive health. The 34 participants of the workshop included counselors working at District Secretariats; attached to Ministry of Women’s Affairs and Ministry of Social Services and officers working in prisons. The participants gave very positive feedback that the content of the workshop could increase their professional capacity. 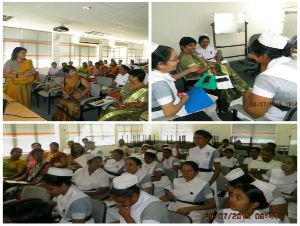 The workshop held on 29th July 2015 at the NSACP auditorium, was a joint effort of FPA Sri Lanka and National STD AIDS Control Programme (NSACP). Reducing stigma and discrimination is considered imperative in preventing HIV and increasing access to treatment and testing. The workshop successfully contributed to fulfilling this intention of changing attitudes and behavior towards PLHIV and at risk populations, among the healthcare workers. The 40 participants of doctors, nursing officers, public health inspectors and attendants were given awareness on HIV, stigma and discrimination. At the close of day, the participants expressed their satisfaction that the standard of healthcare can be further uplifted through such endeavors.